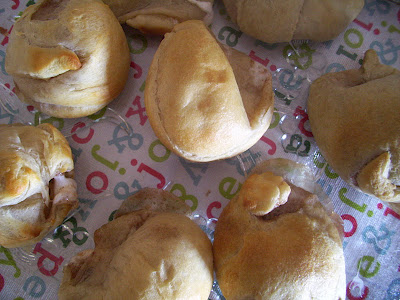 That's not what they are really called, just my personal name for them :) 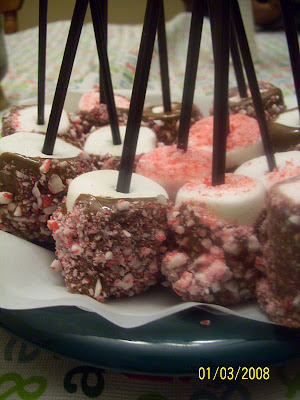 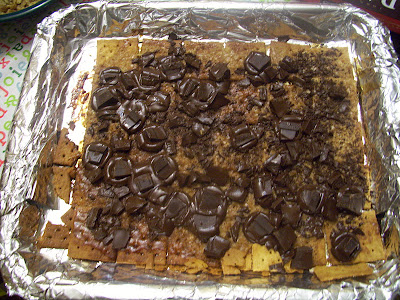 Toffee Crunch
{Must of not gotten a "final" picture; anyway, this was not high on my list!}
More to come!
Posted by Unknown No comments:

Email ThisBlogThis!Share to TwitterShare to FacebookShare to Pinterest
Labels: Baking

Song of the Week {Christmas In The Trenches}

My name is Francis Tolliver.  I come from Liverpool.
Two years ago the war was waiting for me after school.
To Belgium and to Flanders, to Germany to here,
I fought for King and country I love dear.
It was Christmas in the trenches where the frost so bitter hung.
The frozen field of France were still, no Christmas song was sung.
Our families back in England were toasting us that day,
their brave and glorious lads so far away.
I was lyin' with my mess-mates on the cold and rocky ground
when across the lines of battle came a most peculiar sound.
Says I "Now listen up me boys", each soldier strained to hear
as one young German voice sang out so clear.
"He's singin' bloody well you know", my partner says to me.
Soon one by one each German voice joined in in harmony.
The cannons rested silent.  The gas cloud rolled no more
as Christmas brought us respite from the war.
As soon as they were finished a reverent pause was spent.
'God rest ye merry, gentlemen' struck up some lads from Kent.
The next they sang was 'Stille Nacht".  "Tis 'Silent Night'" says I
and in two tongues one song filled up that sky.
"There's someone commin' towards us" the front-line sentry cried.
All sights were fixed on one lone figure trudging from their side.
His truce flag, like a Christmas star, shone on that plain so bright
as he bravely strode, unarmed, into the night.
Then one by one on either side walked into no-mans-land
with neither gun nor bayonet we met there hand to hand.
We shared some secret brandy and wished each other well
and in a flare-lit soccer game we gave 'em hell.
We traded chocolates, cigarettes and photographs from home
these sons and fathers far away from families of their own.
Young Sanders played his squeeze box and they had a violin
this curious and unlikely band of men.
Soon daylight stole upon us and France was France once more.
With sad farewells we each began to settle back to war.
But the question haunted every heart that lived that wondrous night
"whose family have I fixed within my sights?"
It was Christmas in the trenches where the frost so bitter hung.
The frozen fields of France were warmed as songs of peace were sung.
For the walls they'd kept between us to exact the work of war
had been crumbled and were gone for evermore.
My name is Francis Tolliver.  In Liverpool I dwell.
Each Christmas come since World War One I've learned it's lessons well.
That the ones who call the shots won't be among the dead and lame
and on each end of the rifle we're the same.
Posted by Unknown No comments:

I work in our Print Shop during the day, and then I do after school childcare--finishing around 6--which makes reaching a business only open between the hours of 10-4 impossible. So, I'm very glad for Saturday!

First thing I had on my agenda was to pick up some tickets at a businessonlyopenbetweenthehoursof10-2. The tickets were for Handel's Messiah. I am so, so, SO excited to be going this year. I was in highschool when I first learned about it from the choir director. Unfortunately, I was always asked to baby-sit...for him! And then I went to college and we always got out a week after it played. After that, I went to the Northwoods to teach and didn't make it back to Canada at all. So, this is my first opportunity to go, and I'm going! A group of us--10 adults and 5 teens--are all going together and it will surely be a memorable event. I'm taking my brother for his birthday, as it is on the same day.

Next, I swung by Canadian Tire to get some car mats that were on sale and also a couple other things. I did self check out and hurried out to my car. I normally just put all purchases in the back seat, but I wanted to vacuum out my car and so decided to put everything in the trunk.

I popped it up, put everything in and shut it--at least I attempted to. It would NOT close. I checked to see if the trunk-pop-up-latch-thingy was down because I've forgotten in the past. It was down. So I tried again. And again.

Imagine me standing at my trunk--switching between slamming the lid down and prying at the hinge thingy. In the middle of a huge parking lot, on a super busy Saturday. And I was only a couple spaces down from the store. I had tons of people passing me by; I'm sure they were staring but I was way too busy trying to figure out what in the world I was going to do as well as giving my car a few choice names. Not that it was listening to me.

Finally I just got into the drivers seat and looked at my choices:

I was so frustrated with no way of contacting anyone for help. #10 should have been first on my list of choices, but it was soberingly last. I sent a plea to my Heavenly Father asking for help.

Not a minute later, the car beside me made some beeping noises and a man put some things in his trunk. I scrambled out of my car saying "Excuse me--can I ask you a question about my car?". I explained to him that my trunk  wasn't closing and if using a bungee cord would help until I got someone to look at it.

He very willingly came over, mentioning that he was a mechanic. This guy had worked in a dealership body shop for years. I couldn't believe it. This guy actually knew what he was doing! It was his profession. I just stopped in my heart and thanked God for bringing this perfect stranger who was perfect for my need. There are so many scenarios I could have gone through, but God so graciously answered my prayer by sending the best. How humbling.

This young man fiddled around with the latch and hinge and told me it was an easy fix. He then asked me if I had a 10m so he could loosen the nut which would help it close. I didn't even know what he was talking about, let alone have one in my trunk. I asked him what I would do with a 10m once I bought it from the store, and after explaining, he offered to do it for me.

We went into the store and he showed me what I needed. After I purchased the package of wrenches {it was cheaper to buy a package of 3--on sale for $10 from $30--than an individual 10m!} we headed out back to the car and the Mechanic fixed it in just a short amount of time.

I was so grateful. He was very kind to take time out of his Saturday to help a total stranger. I was able to give him a little something, but he will never know how much he has given me and what I learned driving away from the parking lot on this blustery, winter day.
Posted by Unknown No comments:

Email ThisBlogThis!Share to TwitterShare to FacebookShare to Pinterest
Labels: A Story, Me, Random, Thanks
Newer Posts Older Posts Home
Subscribe to: Posts (Atom)